​Traffic in many areas of Virginia can be a nightmare.  Virginia has 4 major interstates running through it (I-64 and I-66 running east/west, and I-81 and I-95 running north/south).  Both I-66 and I-95 run into Washington, DC and as such, are seemingly always heavily traveled.  Development continues along I-95 between Richmond, VA and Washington, DC making that stretch of road hit or miss for a colossal traffic jam.  I-64 can't handle the traffic trying to get through the tunnel so there's always a jam there as well.  Needless to say, driving in Virginia, especially on these busy, congested and frustrating routes can be quite trying.  And of course, everyone is in a hurry to get wherever they are going so patience can run out quickly and it is easy to succomb to the temptation to seize the moment by stomping on the gas pedal and zooming down the road when conditions allow for it.

Resist the temptation.  That momentary bit of impatience or lapse of judgment can have very serious consequences in Virginia because you might end up being charged with a CRIME, not just a traffic offense.

You see the officer pull out as you speed by and you know you've been caught.  You pull over, frustrated with yourself because you are anticipating being issued a ticket for Speeding - a simple traffic infraction.  However, what at first seems like a minor inconvenience to you can actually become a very serious situation with long-term negative consequences if you end up charged with Reckless Driving. 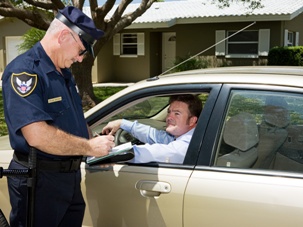 Unbeknownst to many, Virginia has made Speeding a crime if the speed is (1) over 85 mph or (2) at least 20 mph over the speed limit - and that crime is called Reckless Driving.  So, if you are pulled over in Virginia for doing 76 mph in a 55 mph zone, or 82 mph in a 70 mph zone, and you think you have been pulled over for a simple traffic infraction, you are going to be shocked when you are handed a ticket and told you are being charged with Reckless Driving, a CRIMINAL offense, and that is is not pre-payable so you will need to appear in court.

The shock will continue when you get online or speak with a lawyer and learn Reckless Driving is a Class 1 misdemeanor, the most serious category of misdemeanor offenses in Virginia, and the possible punishments include a jail sentence of up to 12 months, a fine up to $2,500 and a license suspension of up to 6 months.  As if that isn't enough, if you are convicted of Reckless Driving the Virginia Department of Motor Vehicles will automatically assess 6 demerit points on your driving record.

Like many other clients charged with Reckless Driving - Speeding, you might agree you were speeding but say you weren't being Reckless or endangering anybody.  This confusion is understandable, but the offense is simply a speeding offense which has been made criminal.  It doesn't actually have anything to do with driving in a reckless manner.  They simply picked a confusing name for the crime.  It should have been called Criminal Speeding.

Of course, there are several things an experienced Reckless Driving Lawyer can do to fight these Reckless Driving - Speeding charges and help you get the best possible result.  In his continuing effort to provide top-notch representation to his clients, T. Kevin Wilson, took the extraordinary step of becoming certified in the operation of Police Traffic RADAR / LIDAR to help defend his clients.

In addition to the various forms of Reckless Driving, Virginia has several other serious motor vehicle offenses which people may not realize are actually CRIMINAL offenses and not simple traffic infractions.  A few of the more commonly cited ones are listed below, several of which deal with the status of a person's license to drive.  The other two listed below involve what is commonly referred to as Hit and Run - being involved in an accident and leaving the scene before exchanging required information; and what is commonly referred to as Eluding - ignoring the police lights / siren and failing to stop for the police.

Other serious misdemeanor traffic cases in Virginia include:

People sometimes mistakenly call these traffic offenses, presumably because they involve a motor vehicle, but don't be fooled - these are all CRIMINAL offenses, and they can lead to heavy fines, suspension of your driver's license and even jail time.

A criminal conviction can also negatively impact your life in other ways:  increased insurance premiums, loss of a commercial driver's license or the inability to rent a car.  It can even threaten your job, especially if your job requires you to drive a company or government vehicle; you have a security clearance; or you are a member of the military, a police officer or other public servant.  If you are found guilty, it will stay on your record for several years - so it can continue to impact your life long after you've served any jail sentence, paid the fine, had your license reinstated and moved on with your life.

A Virginia Reckless Driving Lawyer Can Fight These Charges

If you've been charged with DUI / DWI, Reckless Driving, Driving Suspended, Hit and Run, Eluding or some other criminal motor vehicle offense in Virginia, don't make the mistake of trying to handle it yourself.  You need an experienced and knowledgeable Virginia Criminal and Traffic Defense Attorney who will fight for your rights and work to get the best possible result.

If saving your driver's license, minimizing fines and avoiding a jail sentence are important to you, call The Wilson Law Firm at 703-361-6100 or 540-347-4944 for a free, no obligation consultation and put our expertise to work for you.