What Punishments Could You Face for Disorderly Conduct in Virginia? 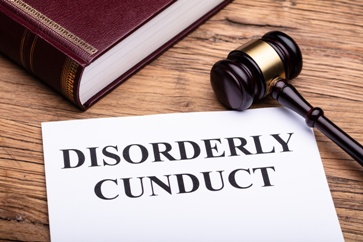 Like other states, the Commonwealth of Virginia has laws that make it a crime to engage in disorderly conduct in public. This is a serious misdemeanor offense that comes with harsh consequences if convicted. However, an experienced criminal defense lawyer who understands the unique aspects of this crime in our state can help you build a strong defense strategy to fight the charges you face.

What Is Considered Disorderly Conduct in Virginia?

Under Virginia Code §18.2-415, an individual can be found guilty of disorderly conduct for intentionally causing or creating a risk of a public inconvenience, annoyance, or alarm. Disorderly conduct can be charged for fighting or for other actions in a public location when the police officer does not have another specific crime that the accused can be arrested for.

To be convicted of disorderly conduct, certain actions must be committed in specific locations. This offense can be charged for the following:

What Are the Penalties for Disorderly Conduct?

Disorderly conduct is a Class 1 misdemeanor in Virginia. If convicted, a defendant can be sentenced to these punishments:

In addition, many cities have ordinances that prohibit disorderly conduct. If charged under local law, the offense could be a less serious misdemeanor offense with different penalties.

Were you charged with disorderly conduct in Virginia? Our skilled criminal defense legal team can mount a strong defense for you that may result in the charges being dismissed or reduced to a less serious offense. To learn more about how we can help you, start a live chat or fill out the convenient only form on this page to schedule your free consultation today.