Why was I charged with reckless driving for passing someone at a railroad crossing? 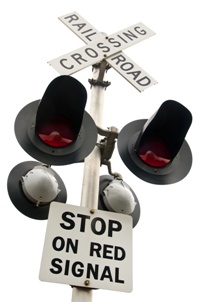 Passing someone at a railroad crossing can result in a reckless driving charge, even if your actions don't cause an accident.

Railroad crossing accidents have been declining since 1980, but a driver is almost 20 times more likely to be killed in a crash involving a train than in an accident involving another car. For this reason, Virginia takes traffic violations involving railroad crossings very seriously.

Virginia law states, "A person shall be guilty of reckless driving who overtakes or passes any other vehicle proceeding in the same direction at any railroad grade crossing or at any intersection of highways unless such vehicles are being operated on a highway having two or more designated lanes of roadway for each direction of travel or unless such intersection is designated and marked as a passing zone or on a designated one-way street or highway, or while pedestrians are passing or about to pass in front of either of such vehicles, unless permitted so to do by a traffic light or law-enforcement officer."

In addition to the license suspension, you'll face hefty fines, the possibility of jail time, and the stigma of a criminal record that can affect your future job opportunities, green card application, and more.