Any crimes where a minor child is a victim are aggressively prosecuted in Virginia to protect our children. You could face very harsh penalties—including a lengthy prison sentence—if you are convicted of child pornography.

Even being falsely accused of possession or distribution of child pornography can have serious consequences in your life. Your friends and co-workers could view you differently, 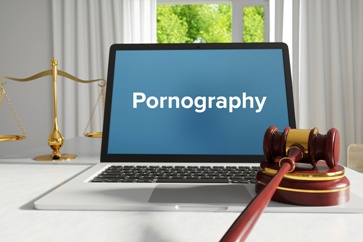 and it could hurt your relationship with your spouse and your ability to keep custody of your children.

If you are arrested for possession or distribution of child pornography, you must treat the charges seriously. Your first step should be to retain an experienced criminal defense lawyer who can mount an aggressive defense so that you achieve the best possible outcome in your criminal case.

What Is Child Pornography in Virginia?

In the Commonwealth of Virginia, child pornography is sexually explicit visual material that utilizes a minor or has an identifiable minor as the subject of it. The minor must have been a minor at the time the pornography was created, and they must be an actual person. Sexually explicit materials are those that depict bestiality, lewd exhibitions of nudity, sexual excitement, sexual conduct, and sadomasochistic abuse. Visual material is broadly defined and can include:

Possession of child pornography is a felony crime in Virginia. Both possession and distribution can also be charged as a federal crime.

Under Virginia Code §18.2-374.1:1, it is a crime to knowingly possess an item that shows sexual exploitation or abuse of a minor. The prosecutor does not need to prove any intentional acts on your part for you to be convicted of this crime. If you could retrieve or view the child pornography by any means, you could also be charged with this crime.

If you are found guilty, you may face these punishments:

It is also a crime to distribute child pornography under Virginia Code §18.2-374.1:1. You could be charged with this offense for knowingly reproducing, selling, giving away, or electronically sending child pornography. It can include emailing, printing, or showing a friend, family member, or others child pornography.

You could also be charged with a similar offense if you ask or tell someone else to distribute the pornography. Sexting, which is the texting of nude or explicit photos to friends and others or posting it to social media sites, is also considered child pornography and can be charged as a possession or distribution offense. Unfortunately, this a common practice of teens and young adults that could result in them facing serious felony charges.

The penalties for this crime include:

In Virginia, you could be charged with multiple offenses if you possess or distribute more than one image that is considered child pornography. Possession or distribution of each picture or other image could be a separate offense. Each count would carry a separate punishment upon conviction.

If you were charged with possession or distribution of child pornography, you need the help of a knowledgeable criminal defense lawyer who understands the elements of these crimes and the defenses you can raise that may result in the charges being dismissed or reduced to a less serious offense. Call our Manassas office or start a live chat to schedule a free consultation to learn how we can assist you.