Lawfully Protesting in Manassas? You Could Be Charged With Unlawful Assembly, Riot, or Mob Offenses 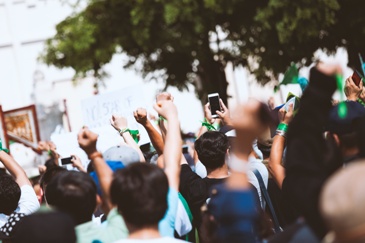 With all the civil unrest and protests in Manassas and throughout Virginia, the police are becoming more aggressive in trying to disperse crowds even when they are peacefully exercising their First Amendment right of free speech and to protest. If you are speaking about issues that are important to you, you could find yourself arrested by the police—even if you did nothing wrong.

Three common offenses that the police could charge you with are unlawful assembly, rioting, or being part of a mob. Here is what you need to know about these serious misdemeanor and felony offenses and the potential penalties you face.

Unlawful assembly can be a misdemeanor or felony offense, and you could face charges for being part of a group that the police consider to be assembling unlawfully. This crime is committed when three or more people gather together with the intent of committing acts of force or violence. Under Virginia Code § 18.2-406, the elements of this offense are:

In most cases, this crime is charged as a Class 1 misdemeanor. However, the offense can be elevated to a Class 5 felony if a member of the group carried a firearm or other dangerous weapon. If convicted, a protester could face these punishments:

An unlawful assembly can turn into a riot if individuals commit acts of force or violence. A person can be charged with this crime even if they were not the ones using the force or being violent. The elements of this crime are stated in Virginia Code § 18.2-405 and include:

Like unlawful assembly, this crime is often charged as a Class 1 misdemeanor. If a firearm or other dangerous weapon was used by a rioter, the offense would be a Class 5 felony. The punishments would be the same as for unlawful assembly.

A group of protesters who gather unlawfully to commit an assault and battery or other act of violence is considered a mob. While participating in a mob is not a crime in itself, being part of a mob can result in an unlawful assembly charge. All members of the mob can be charged with a crime committed by someone in the group. Here are some mob-related crimes that protestors could be charged with:

Were you charged with one of these crimes or another crime when lawfully protesting in Manassas? Our experienced criminal defense lawyers are here to mount an aggressive defense that can result in the charges being dismissed or reduced to a less serious offense. To find out more about how we can assist you, start a live chat or fill out our online form to schedule your free consultation today.