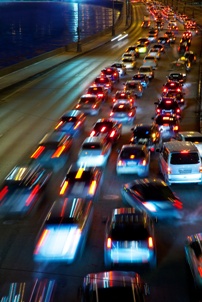 The Pack Won't Keep You Safe

Most radar units have a "fastest" feature that picks out the vehicle that is visually traveling faster than the others. If you're traveling noticeably faster than other cars in the pack, the officer can use this feature to clock your speed and charge you with reckless driving.

If you're not traveling noticeably faster than the other vehicles in the group, all the officer needs to do is use his radar to check the collective speed of the pack. The fact that you were driving with the flow of traffic and other vehicles weren't stopped for driving the same speed is irrelevant.

Defending Against the Charge

Radar detectors still work in heavy traffic, but only when they've been calibrated properly. By law, the officer must produce a calibration certification obtained within the last six months from the date you were stopped. The certificate needs to meet specific legal requirements to be valid, or it can't be used in court.

If the radar detector is calibrated correctly, another common avenue of defense is to obtain a speedometer calibration certificate for your vehicle. The accuracy of vehicle speedometers decreases over time and this deterioration can make a big difference if you were clocked at a speed that was close to the legal limit for the charge. If you can show that your speedometer reading is lower than the actual tested speed of your vehicle, the judge will typically give you credit for the error in the reading and either reduce or drop the charge.