What constitutes probable cause for a DUI arrest? 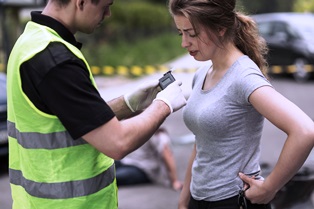 Before an officer can legally arrest you for a DUI, he must have probable cause you were operating a motor vehicle while under the influence of alcohol or drugs.

Essentially, probable cause means that an officer has a reasonable suspicion that you're legally impaired. Examples of behavior that constitute probable cause for a traffic stop include:

If you've already been pulled over, probable cause that you've been drinking includes:

Probable Cause and DUI Checkpoints

DUI checkpoints are permissible under Virginia law, but only if they meet specific criteria. They must be publicized in advance and police officers aren't allowed to stop every vehicle that passes. They must use a mathematical formula to choose who gets stopped, or wait for driver behavior to give them probable cause.

If you've been arrested for a DUI, challenging the legality of your arrest may be one option to consider. When making an arrest, officers are supposed to consider the totality of your circumstances. For instance, one example of erratic driving could mean you were distracted for a second or two. However, several examples of erratic behavior combined with slurred speech and a failed sobriety test provides a stronger justification for your arrest.