Is the police officer’s radar calibration enough to convict me of reckless driving by speed? 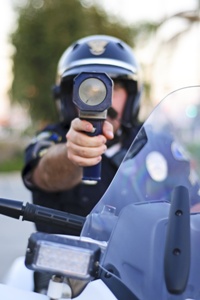 Virginia considers reckless driving by speed to be a misdemeanor criminal offense, but you can only be convicted if the officer's radar reading can be proven accurate via a calibration certification. If the certificate doesn't qualify as legally valid, the case can be dismissed due to a lack of evidence.

Radar guns send and receive radio signals to calculate vehicle speed using the Doppler effect, which is the change in frequency or wavelength for an object moving relative to the wave source. The devices are calibrated using a tuning fork. A tuning fork is a two-pronged metal fork that is most commonly used as a pitch standard to tune musical instruments, but can be also be used to ensure that the radar gun is accurately tracking the radio signals as they bounce off a speeding vehicle.

Officers generally produce original calibration certificates, but will sometimes try to submit a photocopy. A photocopy of the original document may not be considered admissible in court, depending on who produced the copy.

The court allows true copies of records of the Commonwealth of Virginia or its agencies to be used as evidence in a case. However, the copy needs to be authenticated. A simple Xerox is not enough to prove the accuracy of the radar reading.

No matter what the circumstances, it would be a mistake to simply plead guilty and accept the consequences of a reckless driving charge. Reckless driving by speed in Virginia carries harsh penalties, including: