In Virginia, the illegal possession of a gun is a serious criminal offense that is often charged as a felony. If you are convicted of one of these crimes, you could face a 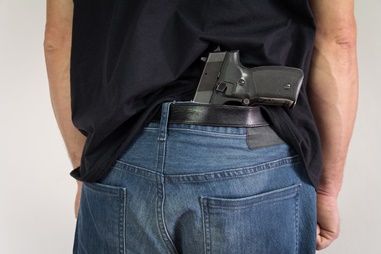 mandatory minimum prison sentence that could run consecutively with punishments for other offenses committed when you were in possession of the firearm.

In addition, you would face the long-term consequences of a permanent criminal record that could limit your ability to obtain a job, professional license, and more. That is why it is crucial that you retain an experienced criminal defense lawyer as soon as possible to mount a strong defense for you that could result in the charges being dismissed or reduced to a less serious offense.

What Is a Firearm in Virginia?

A firearm is defined as a weapon designed, made, and intended to expel a projectile through an explosion—even if it is not operative. It would be considered a deadly weapon if it is likely to produce great bodily harm or death. There are many weapons that are considered firearms in Virginia, such as:

There are many crimes involving the use of guns, such as theft of a firearm, brandishing a firearm, carrying a concealed firearm, and assault with a firearm. Possession charges fall into four general categories.

Possession of a Gun in a Prohibited Place

It is illegal to possess a gun in certain places in our commonwealth. Common offenses include:

Possession of a Prohibited Firearm

Individuals are not allowed to possess certain dangerous firearms in Virginia. Crimes associated with possession of a prohibited gun include:

Possession of a Firearm by a Prohibited Person

Some individuals are not allowed to possess a gun in Virginia. Here are common offenses they could be charged with:

Possession of a Firearm When Possessing Drugs

It is unlawful to possess a firearm when in possession of certain controlled substances. This is a Class 6 felony under Virginia Code §18.2-308. If convicted, the penalty may include a mandatory two or five-year prison sentence, depending on the classification of the drugs in the individual’s possession and how the weapon was being used.

Contact Our Office If You Were Charged With a Gun Offense

Were you charged with one of these or another weapon offense in Virginia? Start a live chat or contact our Manassas office to learn how our skilled criminal defense lawyers will aggressively defend you against the charges you face.